Donna looks up at me near the top of Nubes with gorgeous Lake Nahuel Huapi in the background.

There are two reasons you need to come to Bariloche, Argentina and a 3rd reason why you need to come right now.  The first is that Bariloche is an epic beer town.  More on that to come in a different post, but suffice to say, there are over 20 cervezerias that each make their own assortment of “artesenal” homebrews.  You could literally drink a new beer here everyday of the year, it’s awesome.  The second reason is what this post is all about: Cerro Catedral is a big, bad-ass ski mountain, with over 2,800 acres of terrain and easily accessible off piste terrain if you’re willing to hike or skin a little.  Finally, the reason you need to come right now is that Argentina’s economic woes mean your dollar is stronger (and more needed here) than ever; see this article for more info for why you can get 35% more for your dollar if your bring Benjamin’s down here and exchange them at the so-called “blue rate”.

Cerro Catedral is the reason most people make the trek to Bariloche in the winter months.  It’s pretty much the Aspen of South America, which means its a big ski destination but with its own quirks and a distinctively Latin flair.  One of the oddest quirks is that it is a right of passage for graduating high school students from around Argentina and even Brasil to come to Bariloche for a spring-break-esque week of drinking and partying along with a stop at Cerro Catedral for a taste of skiing.  You can tell the estudiantes because they rove in large packs around town or at the mountain all wearing the same jacket so the supervisors can keep track of them.  Our friends Belen and Martin are ski instructors and detest the influx of obnoxious teenage partiers, mainly because teaching them to ski really sucks.  I guess the only bright side to their presence is that they bring lots of money to the town.  It’s like Bariloche is the equivalent of Cancun for Argentinians.

The most notable bit of Latin flair is that the lift lines are a kind of organized chaos.  Unlike in the US, where line separators keep things organized and groups of people take turns when merging, here it is just a huge free for all.  Get used to getting your skis or board stepped on and having to be a little aggressive at times to keep your place!  Another nuance is that trails aren’t really well marked, unlike in the US where everything is mapped out perfectly.  I guess in both these senses, the resort “feels” more European.

The other thing about Cerro is that it often closes lifts and sometimes almost the entire mountain due to high winds.  This is Patagonia and it is windy here.  The lift technology is, well, generally less awesome than the Doppelmayer high-speeders that you see everywhere at a place like Vail, and the mountain has had lift issues in the past so for safety’s sake they just close things down if there is too much wind.  If you’ve bought a ticket, too bad.  You need to watch weather forecasts closely to ensure you don’t get skunked.

The setup in Bariloche and Cerro Catedral is very Tahoe-ish.  There is a big gorgeous lake and a ski resort with picturesque views of said lake.  Like in Tahoe, the hope is always that the weather will stay cold enough for snow to fall instead of rain when precipitation comes, so it is ever important where what the freeze altitude will be.   Also like in Tahoe, all too often the freeze altitude is too high and you get rain on the mountain where you want to it to be snowing.  Unlike Tahoe, the town of Bariloche is pretty low at an altitude 900m (3000 feet), so it is rare to see town covered in snow.  The base of Catedral is at 1150m, mid-mountain is at 1650m and the top gets up to about 2100m, which is lower than the highest Tahoe resorts.  One shouldn’t be too scared by the initial view from the first chairlift from the bottom of the base, there is snow up top!

This is Patagonia and bone dry at the bottom is common.

The conditions for our first day of skiing were great.  We skied on a Sunday and 2 weeks prior had seen about 6 feet of snowfall at the highest elevations.  The previous week while we were in Spanish school there were some epic days (read here) with even more new snow and then on Saturday night it snowed some more so there was a nice layer of about 6-8 inches of pulvo (powder) up top.  Donna and I woke up early and Canzalo, a housemate at Mara’s place, showed us how to take the collectivo to the mountain.

Speaking of the collectivo warrants a small side discussion about the difficulties getting to Cerro Catedral from town to ski.  First off, there isn’t a whole lot of accommodations at the base of the mountain so unless you’re willing to pay more well over $200 a night you won’t be ski-in / ski-out. Donna and I are on a budget, so that isn’t an option.  The real issue is that the mountain is a good 18 km from Bariloche proper and isolated at the end of a 10 km road, so you need to drive there.  So ideally you rent a car, but that’s at least 60 USD per day, so again not the best option for the budget traveler.  That leaves 2 remaining options: the collectivo or hitchhiking.  The collectivo is great, but only 1 per hour runs and it gets super crowded, so unless you are at the beginning of the line (as Mara’s house is) then it may just blow by you if its full.  Hitchhiking also works and the spot to get picked up is at the beginning of the 10 km road.  We did that on our second day of skiing.  It is great to see that hitchhiking still works; it has a bad rep in the USand its a shame that a few bad seeds can destroy such an amicable and useful way of getting around; but in places like Argentina has less of a stigma and that’s great because otherwise I don’t know what we would’ve done!  Getting back to town from the mountain can be just as tricky, but there is one big collectivo line and we had more luck taking the collectivo back to town.  Finally, given that it is a big pain in the butt to ride a crowded bus or hitchhike with skis, poles and boots, it is worth mentioning that many people pay ~$6 / day to leave their gear in lockers at the mountain.  There are tons of lockers and this is a smart play if you are doing multiple days in a row without a car.

So Donna and I arrive early on our first day and have no problem getting tickets.  The mountain didn’t feel that crowded and we were up on some runs by about 9:30am!  The snow was great and it was bluebird… what more could one ask for!  We spent the first half of the day cruising around.  The view from the top of Nubes chair is breathtaking.  In the mid-afternoon we put on our skins and headed to the off piste area known as La Laguna.  There were guys throwing some big hucks back there that day the terrain was unreal, unlike anything I’ve seen so easily accessible from a resort except for at Revelstoke in Bristish Colombia.  We explored the area and then finished our day with a hot chocolate at a mid-mountain lodge before heading back down to the base via the gondola.

Below is a gallery of pics from the first day.  Click the first pic and then you can browse through the remaining pics in full screen.

Refugio Frey lives back there. 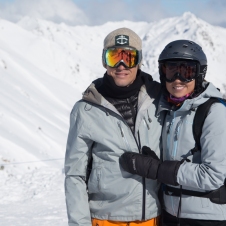 From the top of Nubes

I daresay the views from the top of Cerro Catedral beat what you can find at Tahoe.

Looking across the mid-section of La Laguna. 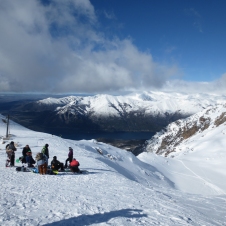 Looking down toward the bottom of La Laguna. It gets the name because the flat part in the lower right is a frozen lagoon.

Donna scoping her off piste line in La Laguna.

Me looking up at Donna about to make a descent in La Laguna.

Having Hot Chocolate before heading down for Apres Ski

In the Gondola on the way down

Over the following week it got significantly warm (40s at mid-mountain!) and there were also a couple of days when the mountain was altogether closed due to high winds.  We were in Spanish school, so it didn’t really affect us, though, but we hoped to be able to ski again that weekend.  The mountain ended up being closed both Saturday and Sunday, but Monday had gorgeous weather and so we hit it again.  At this point we had left Mara’s and were staying near to the beginning of the 10 km road, so we hitchhiked up with our gear, thanks to the nice Brazilian dude who picked us up.  We got to the mountain a little late, at like 10:30am, and did not not anticipate how fricken’ crowded it would be.  Apparently that Monday was an Argentine holiday and combined with the mountain being closed all weekend, there were lots of hungry skiers.  Additionally it was WARM and the mountain looked significantly more barren thanks to melting over the previous week.  It was a total spring condition day, so being late wasn’t actually that bad since the snow softened up nicely for us by the time we got our first run in around noon.  Yes, it took 1.5 hours to get to our first run after arriving as the line to buy lift tickets was 45 minutes and then the base to mid-mountain chair line (pictured at the beginning of this post) was another 45 minutes.  But we had a great day nonetheless, cruising the mountain and getting nice turns on the non-icy northwestern aspects.

At the end of the day we headed to the Catedral Apres-Ski, which is more like a club.  They literally shut out the light with huge drapes and rage like its a 3am discoteca in Buenos Aires from 5-8pm.  Pretty hilarious, really.

Gallery from Day 2 at Cerro Catedral is below.

Selfie from the top of Nevada chair

Everyone was talking about “mucha gente”

Also here is quick GoPro edit of some skiing / boarding action from Day 2.

Next up I look forward to getting more into the backcountry, as there is seemingly limitless terrain to explore and lots of like-minded ski tourers to join in the fun!

We'd love to hear what you have to say! ... Cancel reply

Software Is Eating the World