A Weekend Trip to London

I arrived back in France on June 3rd and was immediately pleased with the transformation that had taken place. Gone were the grey skies and cold, clammy weather, replaced with the gorgeous European summer. Donna was doing great at INSEAD, having hit an awesome stride with school, new friends and the French lifestyle. One of her new friends whom I hadn’t met is an Englishman named Jim Sellars.   I arrived back on a Wednesday and by Friday we were on the “Chunnel” train from Paris to London to visit Jim and his wife, Rebecca.

Our stay was short but sweet. First off, a big thanks to Jim and Rebecca, who kindly put us up in their London apartment. I’d like to be able to say where in London Jim and Rebecca live, but unfortunately my understanding of London geography remains anemic as every time I visit I experience various awesome places I feel like the Tube rides leave my actual comprehension of where I am in the city disjointed and confused.   At any rate, when we visited, Rebecca was 6+ months pregnant and as I write this Jim is the proud father of a 4-month boy, and future captain of England’s rugby team, named Harry. Donna and I can’t wait to meet him!

The first evening Donna and I went to see a play, probably the only theatrical production I’d happily subject myself to: The Book of Mormon. Donna had received the play tickets from her INSEAD friends as a collective birthday gift and we loved the show. It was hilarious and reached went far beyond the edge of political correctness. Ironically, after the play, I observed Mormon missionaries in London recruiting outside the playhouse; I thought, “how smart”, get ‘em while they’re probably more curious about Mormonism than ever before!

The next day Jim and Rebecca gave us cruise-y tour around London. We brunched (Donna had her first Scotch egg and thought it was pretty good), visited Hyde Park, the Natural History museum, and had a couple of pints at one of Jim’s favorite pubs. We finished the day with a nice dinner at a restaurant Rebecca recommended.

The following day was similar with Jim and Rebecca kindly continuing to be gracious hosts for us. I think we hit a brunch spot and then walked to some other cool London locations. Then that evening Donna and I visited a friend and former work colleague who had recently moved to London with his wife and 3 kids. Dan BBQed meat and Kate, Dan’s wife, kindly prepared awesome fixings for a North American style meal (I say North American because Dan is actually Canadian). It was great to catch up with Dan and to get to know his whacky kids a little bit better.

And just like that the short trip was over. We were back on the Chunnel train the next morning where Donna needed to attend some classes. We often forget the real reason for the sabbatical is school, ha!

Note: I didn’t take many photos on the trip, but here a some of the few I did take.

Walking over the river Thames. You can see Big Ben off to the right.

Brits are huge fans of British history and especially the monarchy. This is one of England’s most revered monarchs, King Albert.

Cruising through the “wilds” of London in Camden. You can see Jim in the background, one of the only photos I took of him, and Rebecca is behind Jim. 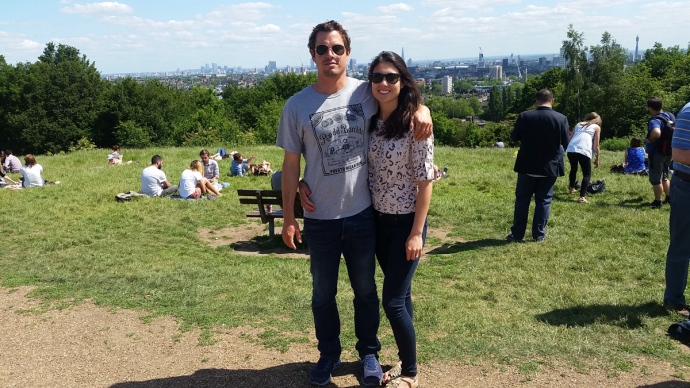 Donna and I at Hampstead Heath, one of the highest points in London

One thought on “A Weekend Trip to London”