Visiting an old friend in Brisbane

After our brief Singapore stopover for INSEAD’s Admit Day, Donna and I caught a flight to Brisbane in order to pay a visit to my longtime friend, Kevin Sevilla, and his girlfriend, Andrea. Kevin and I go way back to middle school days and as soon as I heard about him moving to Brisbane for postdoc work in Engineering Education with Andrea, who is also a PhD in the same field, I knew that I’d have to pay them a visit. Kevin and Andrea went out of their way to roll out the red carpet for Donna and I, taking nearly the entire week off of work to show us around, donating their bedroom for us to sleep in, and opening up many awesome bottles from their wine collection for all of us to enjoy. It was a lesson in hospitality that I hope to have the honor of returning to them someday!

Our stay was only four days, but we packed a lot into the short time. Immediately upon arrival on Monday morning we went on a walking tour of the riverfront area of Brisbane and had a quality champagne lunch. Over the last couple of years Kevin’s sophistication has grown and it is clear that he knows how to enjoy the finer things in life. I was glad that he would always know what wine to order at restaurants and which cafes to grab a coffee; I was never disappointed with what I tasted! 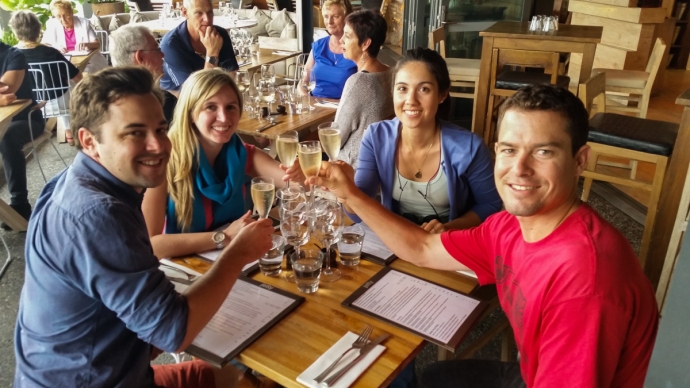 Champagne lunch along the Brisbane River

The following day was more of checking out Brisbane. The Kentucky Derby of Down-Under, known as the Marlborough Cup, was being run that day so the girls donned derby bows in their hair and we ended up watching the race at the Brisbane Casino.   Afterwards we meandered the streets and found ourselves at a bowling alley where Donna utterly schooled me, including finishing her round with a Turkey – that’s 3 strikes in a row. I had no clue she had those bowling skills and will have to practice more in order to compete with her. We finished the day with a free ride on the Brisbane River public boat ferry, sampling a drink or two more on the way home. 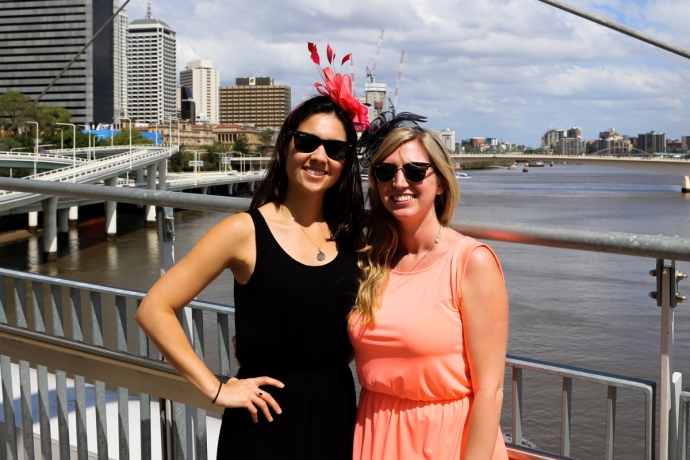 The ladies all dolled up for the Marlborough Cup 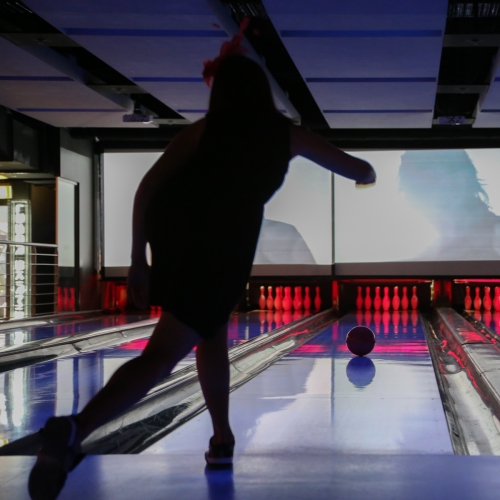 Donna on her way to bowling a Turkey to finish her game. 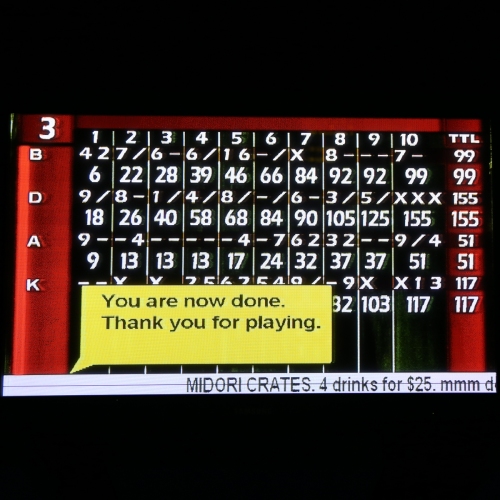 The score card. She crushed me by 56 points! 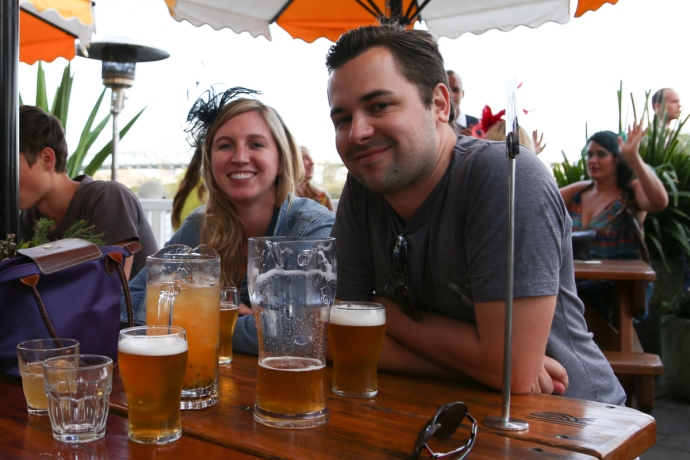 Kevin and Andrea, surrounded by beer and sangria — just the way we like it! 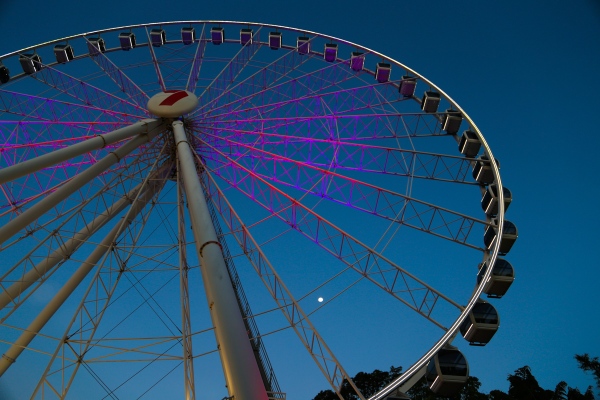 Cool photo of the Brisbane ferris wheel. The white dot is the moon.

On Wednesday we planned on heading out of Brisbane. Kevin left it to me to decide where to go and although I had hoped to check out the surfing mecca of the Gold Coast, there was no swell so the surf spots I’ve seen in magazines and videos wouldn’t have any waves. Therefore I opted to head north towards the Sunshine Coast and take in some of the less crowded Australian beaches. First we stopped to do some SUPing in Caloundra. We rented paddleboards and planned for a relaxing journey across an estuary to make get to Birbie Island, but there was a raging tidal current that we could only beat by doing some walking along sand banks that had built up in the estuary. We ended up reaching our goal and hiking across the sliver of an island to the sea; the return was super easy and quick thanks to the current being with us. After SUPing we continued driving north and stopped at Peregian Beach for some fun antics and photos. By mid afternoon we made it to the chill beach hamlet of Noosa Heads. We went for a hike around the headland and Donna and I got our first look at a Koala that was hanging out high in a eucalyptus tree. Donna immediately fell in love with the cute and cuddly looking animal! 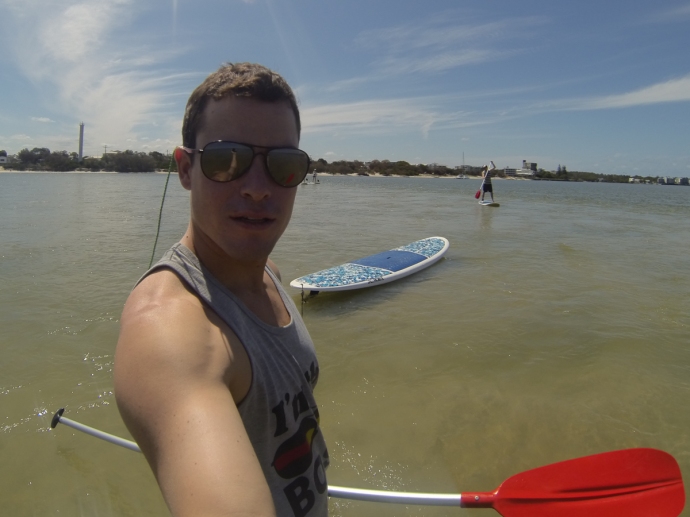 SUPing the estuary at Coloundra. An intense tidal current made it difficult for us to make progress towards our destination. 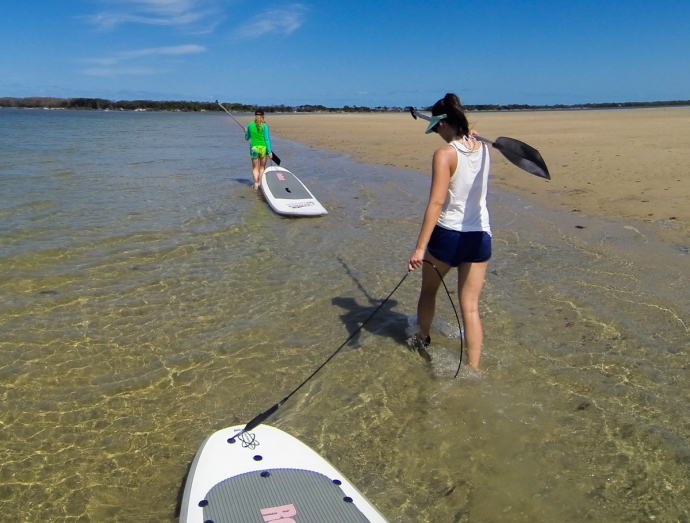 After 40 minutes of paddling we thought it’d be easiest to cheat our way to the island by walking along the huge sandbars that lined the estuary. 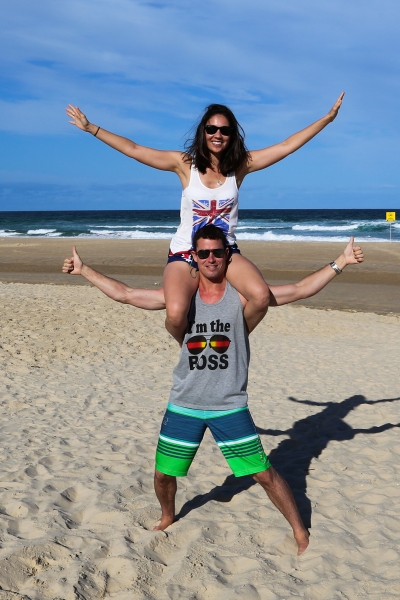 Goofing around at Peregian Beach 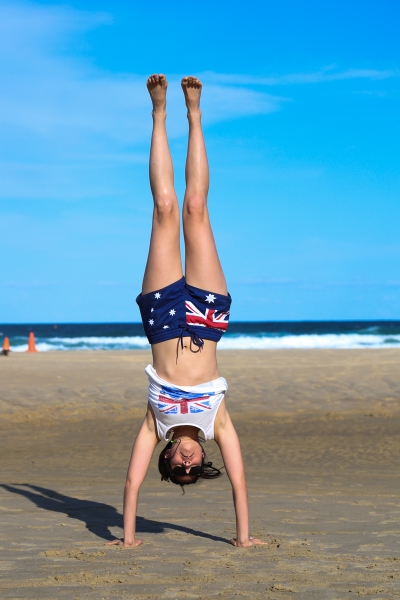 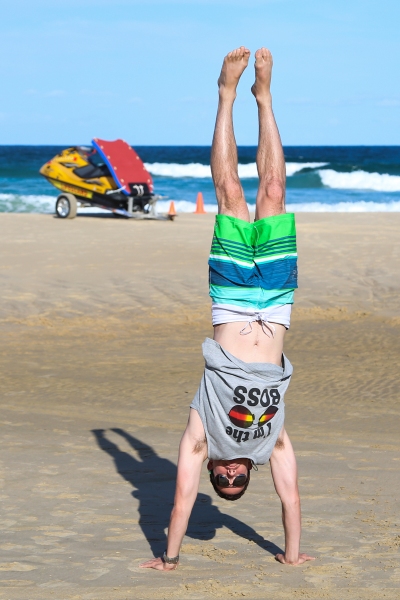 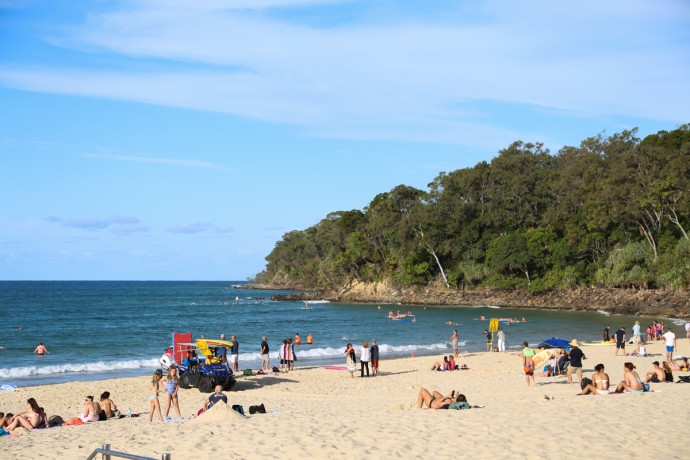 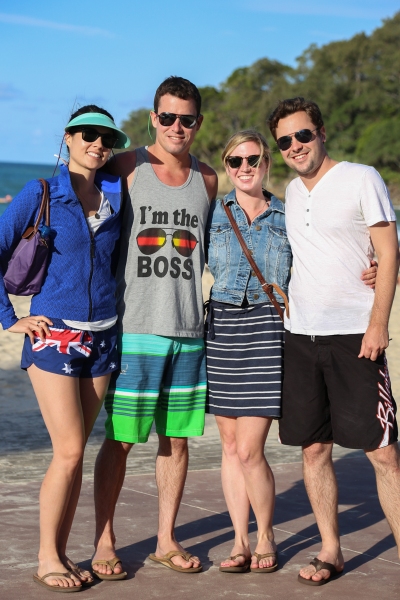 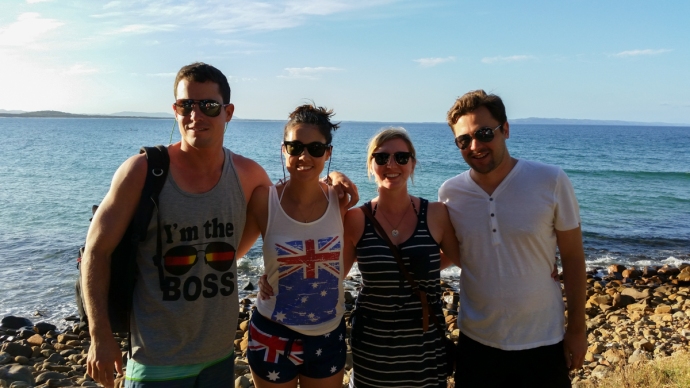 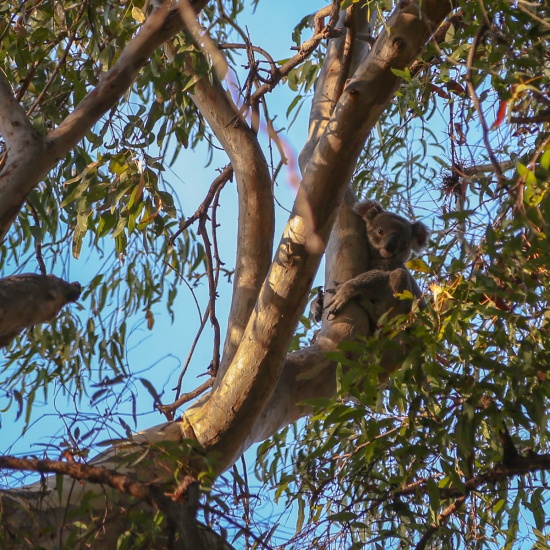 Our last day was a highlight for Donna: checking out the Brisbane Koala Sanctuary. Donna was able to hold a Koala and we both had our first sightings of kangaroos, wallabies and many other animals unique to Australia. The bird show was especially cool and I enjoyed trying to capture images of the birds in flight. 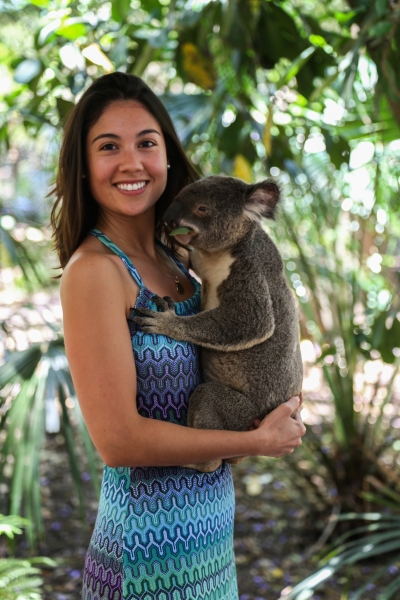 Donna posing with a koala at the Sanctuary. She wanted to take him home, but they wouldn’t let her. 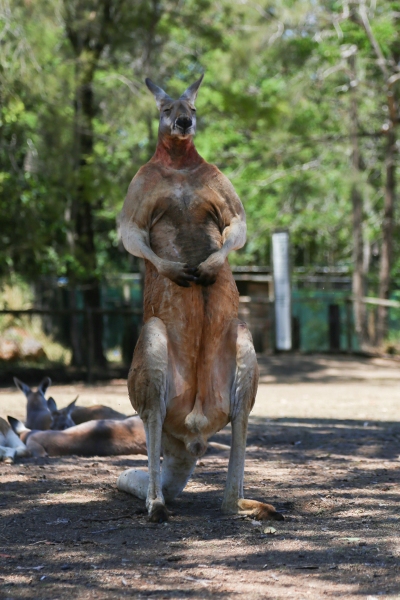 The granddaddy boss kangaroo in the petting area. I was surprised how tall and what big biceps these guys had! 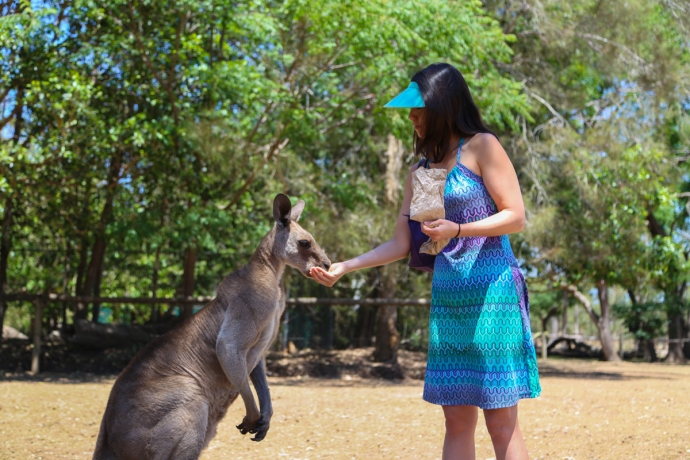 Lots of kangaroo feeding went down 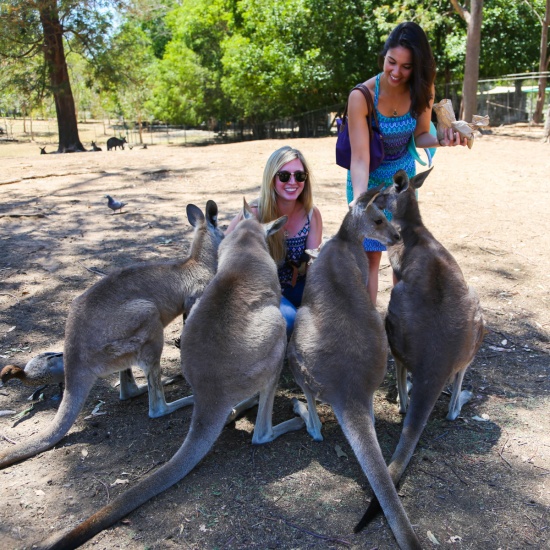 The ladies were super popular that day. Mainly because they had kangaroo food. 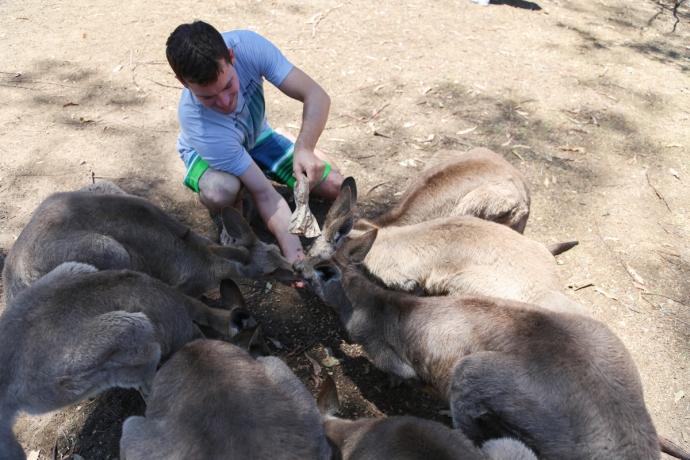 I was popular too! 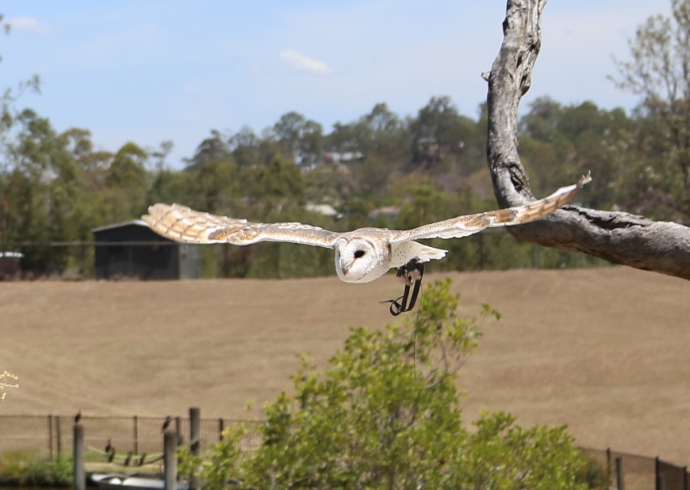 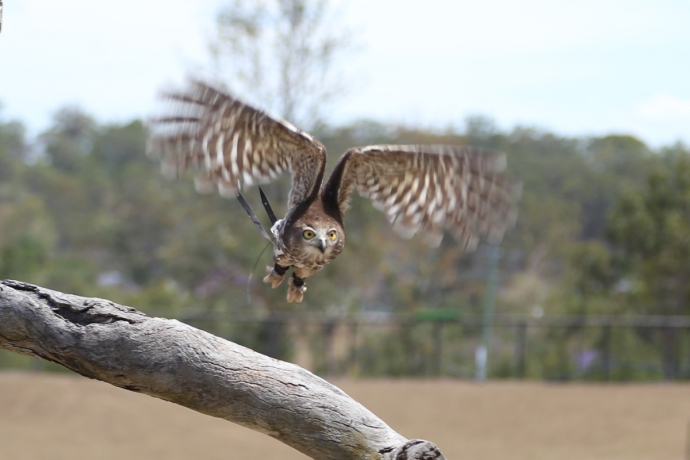 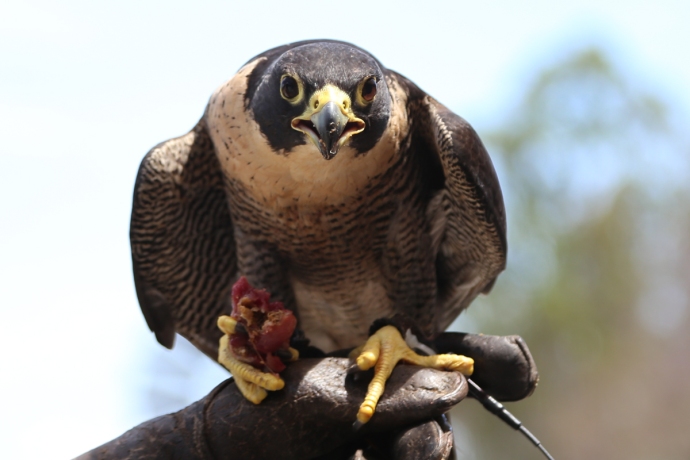 Peregrine falcon. This guy was too fast for me to get a good shot of in flight! 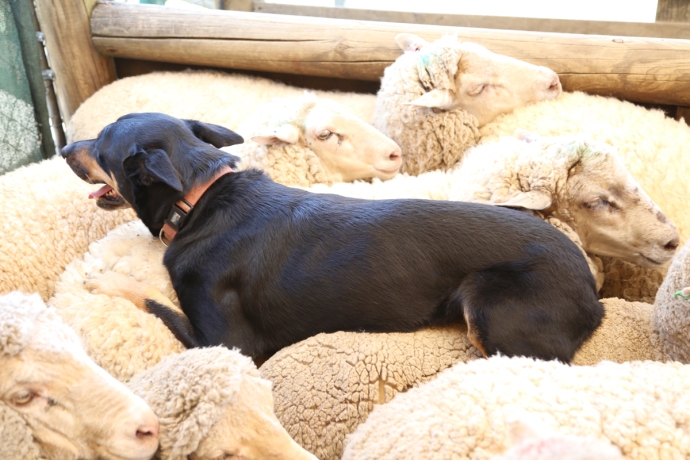 We watched a demonstration of how Australian border collies herd sheep. This was one technique I didn’t realize the dogs used: climbing on top of the sheep! 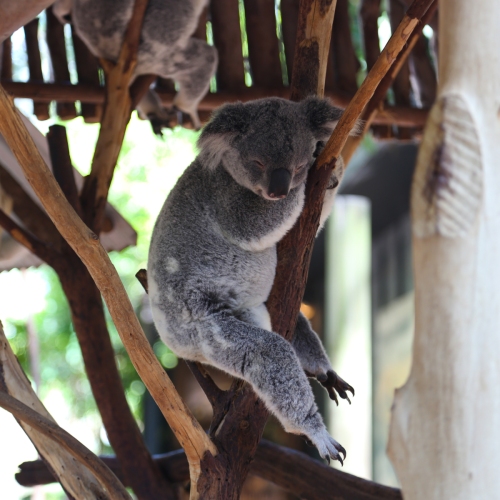 That evening was our last and Kevin was stoked that the time had come for him to drink a bunch of good wine from his collection. But first Kevin and I needed to go to his favorite bar called The Cobbler for some whiskey tasting, where we sampled some fine Tasmanian and Japanese single malts. Dinner was had from a food truck gathering right across the street from Kevin’s apartment and then we started the wine drinking. First Kevin opened two bottles of sparkling wine, one from Tasmania and the other (I think) from France (which would make it champagne), then we drank two bottles of full bodied red wine from southern Australia, and once happily buzzed we though it a good idea to finish the evening off with a fine Spanish sparkling wine. We went to bed late and had to catch a flight early the next day, but Donna and I’s slight hangovers were well worth all that tasty wine! 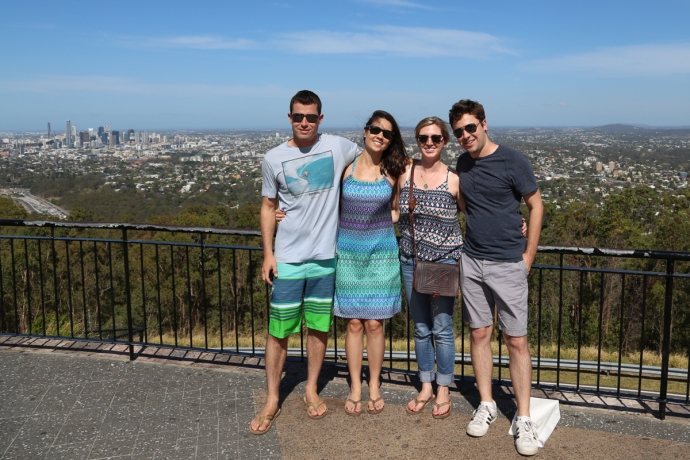 The crew again, this time hanging out at Mount Coot-tha overlooking Brisbane 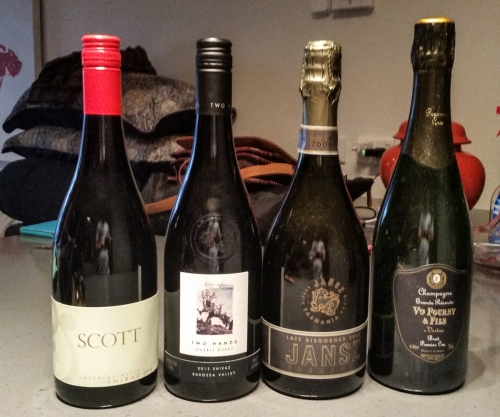 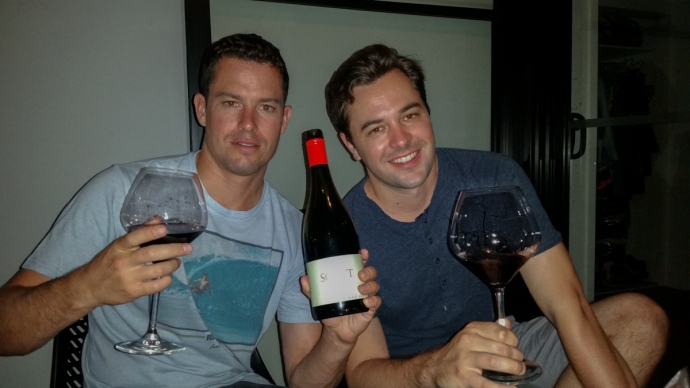 This particular wine is from a winery called “Scott”, so we dedicated our consumption of said wine to our good friend Scott 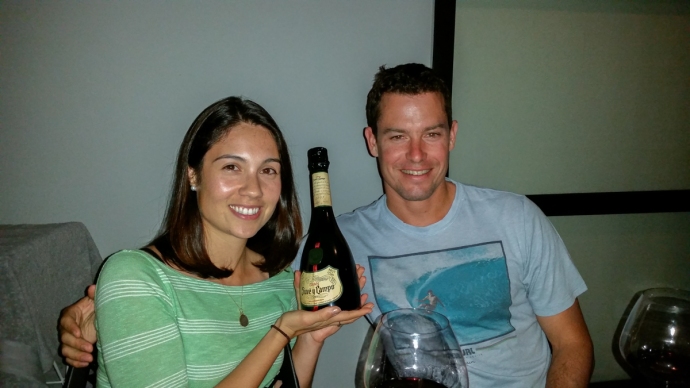 Our stay was short and sweet and again I have to give credit and thanks to Kevin and Andrea for making everything so wonderful for Donna and I. You guys are the best!